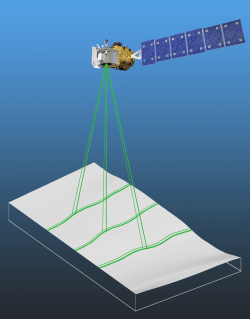 A lidar satellite mission to inventory and monitor forests is recognized as an important goal for earth science remote sensing (NRC 2007). The Ice, Cloud, and land Elevation Satellite-2 (ICESat-2) mission will address the vegetation discipline’s need for lidar data. Although many hardware decisions for the Advanced Topographic Laser Altimeter System (ATLAS) on ICESat-2 have been made, some questions remain, especially in the area of mission operations. Representatives of the various disciplines must provide input to the SDT that is thoroughly quantified and be ready to explain their methodologies and defend their conclusions to the larger community. As there are few datasets that are directly analogous to those we expect from ICESat-2, reduction of uncertainties will likely require a broad range of studies to predict the performance of the sensor under a variety of mission scenarios.

Novel algorithms will be needed to retrieve canopy height from ICESat-II data. Due to the low signal-to-noise ratio of ICESat-2, methods developed for discrete-return or waveform lidar are unlikely to be directly useful. The algorithm we’ve developed assumes that returned photons from the canopy will be spatially clumped, while the spatial distribution of atmospheric noise will be random. The algorithm quantifies spatial pattern using point process analysis. This new algorithm shows promise for height estimation in areas with high foliage cover, a problem that has been recognized as challenging for ICESat-2. As part of the SDT, I would continue to use simulated ICESat-2 data to develop algorithms for the estimation of the structure of closed canopy forest as well as working on characterization of open canopy vegetation. 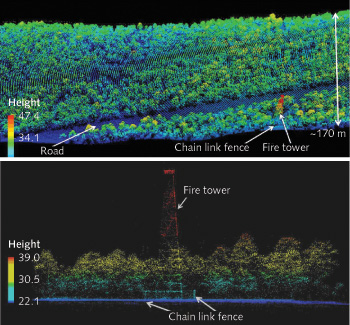 Vegetation vertical structure has been identified by the ecosystem community at large, and by scientific panels, such as the NRC Decadal Survey, as the highest science priority, and lidar is universally acknowledged as the most accurate means of deriving that structure. The loss of the lidar segment from the DESDynI mission has left the ecosystem community with no planned structure observations other than what the ICESAT-2 (I2) mission will obtain, to be used by themselves, or in fusion with the DESDynI radar segment (DESDynI-R) and other data sources.

Two decades of experience with waveform sampling lidar have given us a clear knowledge of what is achievable from spaceborne waveform lidar, allowing us to inform space mission development and determine the implications of such missions on science priorities for terrestrial ecology. Unfortunately, there is no comparable background information for the single photon-counting lidar (SPL) technology of the ATLAS instrument on the ICESAT-2 mission. As a consequence there is tremendous uncertainty about its capabilities as deployed in space, and the role such observations can play, either alone, or in fusion with other sensors, in the study of ecosystems and the carbon cycle. This uncertainty leads to a set of basic questions that must be addressed regarding the efficacy of SPL and which form the central basis of our proposed research.

The overall goal of our study is to explore the efficacy of SPL for deriving ecosystem structure. In particular, we seek to answer the following questions:

1) What methods are most appropriate for retrieval of canopy height and vertical structure using SPL?

2) What accuracies are likely achievable for the estimation of ecosystem structure from ICESAT-2 and how will these vary as a function of environmental and canopy conditions?

3) What are the impacts of the difference in expected performance of ICESAT-2/DESDynI-R vs. the original DESDynI mission on biomass estimation and habitat characterization?

Our methodological approach is to first determine how the wealth of existing waveform and discrete lidar, and the very limited airborne SPL data may be used to simulate spaceborne SPL. Given its very low energy return, the performance of SPL is hypothesized to vary strongly with canopy cover and other environmental gradients. To explore this issue more fully, we propose to acquire new SPL data using a proven commercial SPL system over a strong gradient in the Sierra Nevada where the researchers have existing lidar and field data. These data sets will allow us to develop and test algorithms for estimating canopy height and canopy structure, and to understand the potential dependency of algorithm efficacy on canopy architecture, among others. These algorithms will then provide us with sets of simulated structure retrievals, from which ICESAT-2 performance may be assessed geographically.

Our proposed research falls into five major categories of activities: (1) identify appropriate methods of simulating MPC space observations using existing waveform, discrete return and MPC airborne lidar data sets; (2) acquire new MPC data across a strong geographic environmental gradient in the Sierra Nevada; (3) develop and test algorithms for retrieving canopy height and vertical structure from MPC; (4) assess the expected performance of MPC data from I2 and understand how this performance varies as a function of geographic canopy and environmental variability; (5) test I2-like data sets, by themselves, and in fusion with other remote sensing data to assess impacts on biomass estimation and habitat characterization relative to Decadal Survey recommendations as proposed for DESDynI.

Ultimately, our research will help define the efficacy of MPC for the retrieval of ecosystem structure, and in doing so provide direct guidance to the Terrestrial Ecology program on the carbon and ecosystem science achievable during the I2/DESDynI-R era.

The Electronically Steerable Flash Lidar (ESFL) is a new type of imaging, full-waveform lidar for advanced three-dimensional imaging of forest scenes. Designed with a technology path-to-space, it utilizes independently steerable multiple beams from a laser combined with a two-dimensional “Flash” focal plane array configured with integrated micro-lens arrays. The combination allows the system to be dynamically reconfigured to match the spatial sampling to the forest scene of interest to maximize science return. The ability to reconfigure the beam pattern while imaging the patterns has a number of advantages. Larger beams can be used to match typical tree crown sizes for a region while simultaneously sub-beam imaging can provide finer detail. The beams can be configured for contiguous sampling as a pushbroom to measure the fine spatial scales of the forest (important for estimates of biodiversity) or spaced apart to give a statistical measurement of the biomass stored in the larger forest. The fine pointing capability can allow precise beam ground tracks to be followed from aircraft or space. Using data from co-boresighted secondary cameras, the beam steering can be used to steer the beams to fall between clouds (when broken), increasing science returns. Since a two-dimensional Flash focal plane array is used, the beams can be configured as either cross-track, along-track, or even a combination where the beam energy can be re-configured at the video rate of the focal plane. ESFL has been built, and flight testing has started, on a NASA Instrument Incubator Program to demonstrate its potential. The proposed effort will extend the performance capabilities of ESFL and prepare it for investigator led aircraft science campaigns. This includes aircraft demonstration work validating its science measurements using traditional forest survey methods, new close-range photogrammetry, and a ground-based lidar. 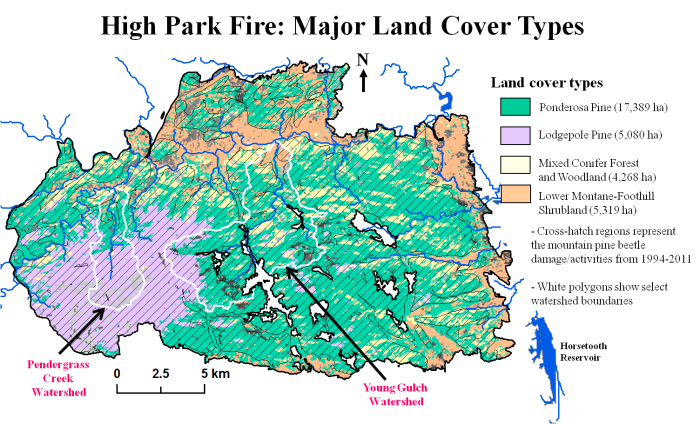 Summer 2012 has been an intense wildfire season throughout the western U.S., and the largest of these fires so far is the High Park Fire in Northern Colorado. The fire has already damaged more than 250 structures, burning an area over 35,000 ha. The burned area drains directly into the Cache la Poudre River, a critical water source for northern Colorado communities. It is in many respects the first example of the worst-case scenario fire that has been the concern of land managers, policy makers and scientists for over a decade. This proposal outlines a plan to respond to this natural disaster; its urgency derives from the probability that conditions on the ground will change rapidly after the fire. Summer rains will initiate post-fire erosion and sedimentation; management activities will alter the landscape characteristics, and vegetation will begin to regenerate.

: The proposed work will document the impact of the high park fire on the forests, soils and geomorphology of the burned area in coordination with a second RAPID proposal submitted by individuals associated with the NEON’s Airborne Observation Platform (AOP). Together, the two proposals will support the collection of remotely sensed data (visible-to-shortwave infrared imaging spectrometer, small footprint waveform lidar, and high resolution digital camera) over the area disturbed by the fire and adjacent unburned areas. The remote sensing data acquisition will be coordinated with a targeted field campaign to collect baseline information on forest composition, structure and three dimensional distribution, soil biota, and rates of erosion and sedimentation.

The primary question guiding the proposed research is: What is the state of the landscape at the conclusion of the High Park Fire, both within the fire’s final boundary and in reference areas outside the fire? Because this is a rapid response proposal, the focus is on essential data collection to characterize post-fire conditions, but data collection efforts are designed in the context of two broad categories of science questions for future research: 1. How did conditions prior to the fire affect fire behavior and impacts?, and 2. How does fire severity and pattern affect post-fire trajectories? The proposed monitoring plan incorporates vegetation, hydrologic, geomorphic, and soil measurements that will best facilitate use of lidar and multispectral data from the NEON AOP.

Combining the field and remote sensing datasets will allow an unprecedented assessment of the impact of the fire, provide data products useful to the scientific and management communities, and support future research on post-fire trajectories. The sample design will prioritize the ability of future researchers to integrate the data collected during this project into future research. The coordination of the field monitoring effort with NEON AOP will be a first demonstration of NEON’s rapid response capabilities and will form a prototype for collaboration between NEON and the research community at Colorado State University. Graduate students will be fully integrated in the research, thus building awareness and capacity for using NEON AOP data in the future.

Findings from this research will be of significant interest to multiple stakeholders in the region, including the US and State Forest Service and the Cities of Fort Collins and Greeley, both of whom have water supplies likely to be affected by post-fire erosion. We plan a workshop to coordinate research efforts with stakeholders, transfer data products, and develop future research plans. The data products and connections developed through this project will set the stage for future interdisciplinary research addressing complex feedbacks between drought, fire, and water supply.