Value of the aerial photography record

Since the launch of the first Landsat satellite in 1972, the availability of satellite images has had a profound effect on our understanding of the planet and the way we manage its resources. These images provide a baseline used to compare with current conditions, and play a major role in detecting trends in land use and documenting ecological impacts of global change.

Applications of satellite imagery are limited by the record’s relatively recent origins. While satellite images were first collected in 1972, there are large archives of aerial photography with substantial national and international coverage from the decade before 1945. During that period, institutional predecessors to the U.S. Natural Resource Conservation Service collected aerial photography over 97% of the conterminous United States. In addition, the U.S. National Archives holds over 30 million aerial photos, collected on every continent during the period before 1970. Half of these photos were collected before 1950, including photos taken in the early 1940’s for the purpose of mapping global air transport routes in the lead up to World War II.

These archives, along with significant English, French and Belgian collections, provide a record of global ecological and social conditions prior to the surge of population and economic growth that occurred after World War II. If we examine indicators of human impact to the environment, the early 1950’s shows a clear change in the rate of increase in human population and global energy use. By the time that Landsat was available to monitor the globe (1972), population had more than doubled from 1.7 billion to 3.7 billion (currently 7.4 billion), and energy use had increased from 57 exajoules to 223 exajoules on its way to the current level of 550 exajoules.

During the period 1930 through 2010, forested land dropped from 22.5% to 17.5% of global land cover while secondary forest increased in area relative to primary forest, and agriculture increased from 20% of the global land surface to 30% (primarily due to conversion of tree-grass ecosystems (Hurtt et al, 2011). Roughly half the change in forested land area occurred in the period 1940-1970 while 75% of the agricultural land change occurred in the same period. Aerial photography collected prior to the Landsat era of remote sensing can provide insights into land use dynamics within the 1940-1970 era. They can also improve mapping of forest age and productivity.

Although the overall trend of change in the post-WWII period has been the conversion of natural ecosystems to agricultural and urban land use, examination of specific regions indicates a more complex picture. The USDA has been performing a non-spatial analysis of the fraction of land in various land uses since 1945. An examination of trends indicates that while some states have experienced only modest changes in forest area (e.g. Maryland, Missouri) others have experienced very large changes in both positive (New York) and negative (Massachusetts) directions. While these general trends have been documented, the changes in the spatial organization of landscapes have not. We do not know if changes in forest area occurred in small or large patches or where they occurred within each state. Trends in land use for the 1930-1970 may not have been similar to later changes in either direction or magnitude. Independent information on land use change is required to document these changes and the only spatially explicit data for the pre-Landsat era is historic aerial photography.

What can be done with historic aerial photography?

Many of the traditional aerial photography applications were developed and first applied on a large scale by USGS. Some came out of the topographic mapping mission: photogrammetry for the creation of the topography and the generation of accurate locations and photointerpretation for creation of ancillary map information such as transportation and land use. All of them rely on the high spatial resolution aerial photography.

Photogrammetry is the measurement of features from aerial photographs. In my work I am interested in creating three-dimensional maps of forest canopies to describe their total height and canopy structure.

There have been tremendous advances in this field due to the development of algorithms both within the photogrammetry community as well from the use of two-dimensional images to reconstruct three-dimensional positions for computer vision and robotics applications. As the development of these “structure-from-motion” algorithms has become a priority for academic computer scientists and software companies such as Microsoft and Google, their level of sophistication has progressed significantly. Software using these principles is capable of identifying matching points in pairs of images, reconstruction of the position of cameras during image capture and automating the creation of dense point clouds similar to those collected by lidar sensors.One such software package (Agisoft Photoscan) has been used in my work to create maps of the three-dimensional structure of forest canopies.

Advances in photogrammetry techniques will not overcome a primary disadvantage of using images to create dense point clouds- they cannot penetrate through the canopy and cannot be used to derive accurate estimates of terrain elevation under vegetation cover. However, they can be combined with terrain elevation from lidar remote sensing to create a new data product of object heights, including the heights of forests. We have used this approach to compare historic canopy height from 1941 photography to canopy heights derived from 2013 lidar data. The 2013 canopy height model was generated using lidar data to characterize both the maximum elevation of the canopy (digital surface model or DSM) and the terrain elevation model (digital terrain model or DTM). The 1941 canopy height model was created using photogrammetry to generate the DSM along with the 2013 lidar DTM. This allows us to compare current forest heights to the those that existed before the last 75 years of economic development, forest management, and fire.

We have used the same techniques to estimate the canopy surface elevations of tropical forest northeast of Manaus, Brazil. The images for this analysis are from the Defense Intelligence Agency collection highlighted in the map at the top of this webpage. Using these techniques we can compare changes in canopy structure that have occurred over a span of 80 years, which should give insight into changes in the frequency and magnitude of disturbances to the forest. 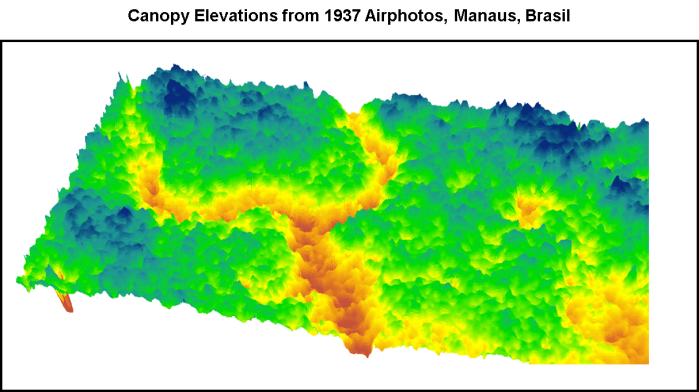 Photointerpretation: The original approach to identifying the objects on a photo (and related characteristics such as land cover) is manual photo-interpretation. Although there have been some advances in automated identification, the human eye and brain are still unsurpassed for identifying objects from shape, size, texture and context. This is especially true for the panchromatic (i.e. black-and-white) images that make up the majority of older aerial photos because these photos cannot directly be used with multispectral classification algorithms. Photo-interpretation could still be valuable for some applications such as tracking changes in socio-economic indicators, as with the following images from Vila Amazonas, Brazil collected in 1941 and 2016 . In addition to the growth of the town itself, one can see extensive reworking of wetlands in the area and the loss of forested land to the east. As with other applications, historic aerial photography is a unique source of this information.

Land cover classification: Modern approaches to land use and land cover analyses require spatially explicit GIS layers. Panchromatic images contain information on land use and land cover in their tone and texture. These aspects of the images can be summarized using texture indices. In the following figure, the texture of the same historic aerial photographs from Colorado in 1941 have been processed using Haralick texture indices.

Texture indices can be used as a data source for classification using conventional algorithms. In the following case we classified texture indices derived from the 1941 photography into closed forest and grassland/pasture classes. A similar classification based on 2011 imagery shows the degree and spatial distribution of disturbance since that period. The ability to apply automated classification algorithms to aerial photography opens up the possibilities of documenting historic disturbance regimes and land cover change detection between historic and current land use.

Advances in photogrammetry and image processing allow us to map land cover class and forest structure information from historic aerial photography. As a consequence, we can extend the time series of land cover change from 45 years (with Landsat) to over 80 years and compare forest structure and estimates of stored carbon from the same period provided he have (or collected) airborne lidar over the same area. Making these photos and techniques more generally available to the management and scientific communities will provide a wider perspective for understanding current conditions and change.

Current status of work: Regrettably, despite many conversations with individuals representing  the U.S. government agencies that typically fund research on remote sensing and ecology, as well as private corporations and foundations with interests in these same areas, I have had no success in finding funding for this project. In my lab, progress on this work has been been dramatically curtailed except for a project mapping forest cover for Puerto Rico. I hope to continue this work when I have identified a source of funding.